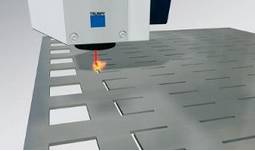 Fiber laser cutting machine uses fiber laser. Like traditional solid and gas lasers, fiber lasers are composed of three basic elements: pump source, gain medium and resonant cavity. Under the action of pump light, the high power density is easily formed in the fiber, which causes the laser energy level of the laser working substance to “reverse the number of particles”. When a positive feedback loop (constituting a resonant cavity) is properly added, a laser oscillation output can be formed, focusing. In the high-power density laser beam irradiation condition, the laser heat is absorbed by the workpiece material, and the temperature of the workpiece rises sharply. After reaching the boiling point, the material begins to vaporize and form a hole. With the high-pressure airflow, as the relative position of the beam and the workpiece moves, the final The material forms a slit.