2. The choice of laser type and wavelength have an important influence on the cleaning effect

As shown in the figure, the absorption coefficients of various metals change with wavelength. At λ=916nm-1200nm, most metals have higher absorption coefficients in this band, and organic matter has relatively strong laser absorption in this band. Because of this, in terms of absorption rate, combining the comparative advantages of various aspects, fiber lasers have demonstrated unique advantages in all aspects. The organic pollution layer absorbs the laser strongly, and the temperature of the organic pollution layer quickly rises to the evaporation point to vaporize, thereby achieving the purpose of removing the pollution layer without damaging the substrate. Then determine the energy threshold of laser cleaning, the energy threshold of laser cleaning will determine the effect of laser cleaning. Selecting the appropriate laser cleaning energy threshold requires comprehensive consideration of the material's performance, microstructure, morphological defects, and the effects of laser wavelength and pulse width. 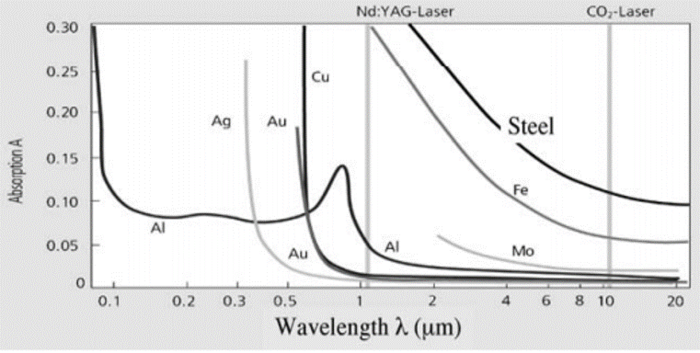 When the laser is incident at a certain oblique angle, the laser is directly radiated under the adhered particles, resulting in higher thermoelastic stress. Compared with normal incidence, the pollutants are more easily removed. In addition, the study found that with the increase of the tilt angle, the laser radiation area is wider. When the tilt angle is 20 degrees, the area of the area to be cleaned is about 10 times that of normal incidence, which effectively improves the efficiency of laser cleaning.

The cleaning mechanism will be different for different defocus amounts. Cleaning is the mechanism of explosive cracking of the surface material when it is defocused, and when the amount of defocusing becomes large, the removal of the paint layer is changed from fragmentation to vaporization.

In order to optimize the effect of laser cleaning on metal surfaces, it is necessary to comprehensively consider the laser cleaning method, cleaning model, laser type, laser wavelength, energy density, power, pulse frequency, pulse time, and laser incident angle. Pulsed laser can effectively clean the corrosion of carbon steel surface. When the wavelength is 1064nm, the laser power is 500W, the pulse frequency is 10kHz, the pulse width is 120ns, the cleaning speed is 60mm/s, and the lap rate is 5%. The corrosion effect is the best, and the presence of oxygen is not found in the laser cleaning of the rusty surface, micro-areas, lines and points. Only a systematic study of process parameters can form an efficient laser cleaning system.