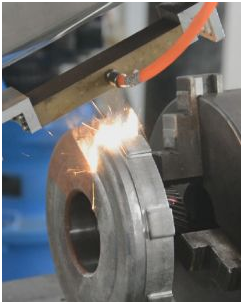 Laser cleaning efficiently removes rust and oxide layers from the surface of metal materials. When the metal is exposed to moist air, it reacts with water to form ferrous oxide, which rusts. Rust will reduce the quality of the metal and affect the use. On the other hand, due to the heat treatment process, an oxide layer is formed on the metal surface, and the oxide layer discolors the metal surface, thereby hindering the subsequent finishing operation.

Removal of these surface deposits requires descaling to provide a smooth surface for pre-finishing and finishing (eg electroplating). Traditional methods of descaling and descaling include physical methods such as sand blasting, polishing, scraping, additional purging, and wire brushing; and chemical methods such as the use of alkaline or acidic chemicals to remove oxide layers. However, these methods not only cause environmental pollution, but also damage the base metal.

The emergence of laser cleaning technology solves this problem and reduces the loss of iron. Laser cleaning has become the preferred method of descaling and descaling operations. The rust layer/oxidation layer is removed by irradiating a laser beam having a high peak power and a high repetition frequency on the rust layer. The laser must be emitted with a short pulse to avoid damage to the base metal. Rust quickly absorbs the energy of the laser beam, causing the temperature to rise. Once the temperature is high enough, the rust will melt and eventually evaporate.

Pulsed fiber lasers are preferred because they provide greater control over power, wavelength, and pulse duration, allowing the rust layer/oxide layer to evaporate without causing any damage to the substrate material.

The laser cleaning process can also be used for surface cleaning. Before applying a corrosion-resistant protective coating to steel parts, the surface of the part must be cleaned so that there are no contaminants on its surface.

Fiber laser cleaning eliminates the traditional contact or chemical reaction cleaning method, which is very suitable for surface cleaning preparation and rust removal and descaling. The cleaning scale can be large or small, and the cleaning automation is very high. As an emerging environmentally friendly and economical method of descaling, laser cleaning is increasingly recognized by the market.