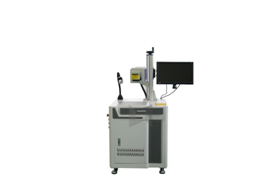 The working principle of a carbon dioxide laser is that the laser source requires a lot of energy to excite nitrogen molecules to collide with CO2 molecules (laser gas), causing them to emit photons to form a laser beam capable of marking substances. Typically, CO2 laser marker lasers are typically made of hard glass and are typically layered in a cannula configuration. The innermost layer is the discharge tube, the second layer is the water-cooled outer casing, and the outermost layer is the gas storage tube.

2. Resonant cavity: This part consists of a total reflection mirror and an output mirror. The total reflection mirror of the cavity is usually based on optical glass with a gold film on the surface and a gold mirror at 10°. The reflectance of about 6um is higher than 98%. The output mirror of the cavity typically uses an energy transfer of 10. 6 um of the irradiated infrared material 锗 (ge ) as the substrate and a multilayer dielectric film is formed on the substrate.

3. Electrode: A CO2 laser is usually a cylindrical cold cathode. The choice of cathode material has a large impact on the lifetime of the laser. The basic requirements for cathode materials are: low sputtering rate and low gas absorption.