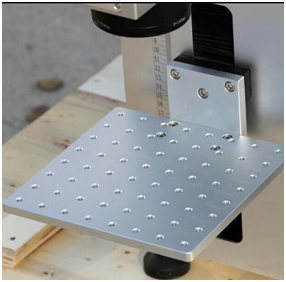 The laser marking machine is a deep layer of material exposed by evaporation of surface substances by laser beam. It is engraved with exquisite patterns, trademarks and texts. However, many companies or individuals find that the marking effect of the marking machine is uneven after purchase for a period of time. In fact, the main reason for this phenomenon is nothing more than a few points, and the way to avoid it is not complicated. Let us take a look at the solution to the uneven marking effect of the laser marking machine.

First, use a bias to mark a certain range of content

Because each focusing mirror has a range of focal depths, and it is very easy to use a method that deviates from the focus to cause a large-scale marking pattern, the edge is at the focal depth or beyond the depth of focus, which is very easy. The effect is uneven. Therefore, the method of defocusing marking is to think about the problem of laser energy.

Second, the laser output spot is blocked, that is, the laser beam passes through the galvanometer and the field lens, and the spot is lacking.

The laser output head, fixed fixture and galvanometer are not adjusted, which causes the local light spot to be blocked when the laser passes through the vibrating lens. The spot on the multiplier is non-circular after being focused by the field lens, which may cause the effect not to occur. average.

When the laser passes through the optical lens, the lens heats up to produce a subtle deformation. This deformation causes the laser focus to rise and the focal length to become shorter. If the machine is fixed and the interval is adjusted to the focus point, after the laser is turned on for a while, the laser energy density acting on the material changes due to the thermal lens phenomenon, thereby causing the marking effect to be uneven.

Fourth, the degree of the machine is not adjusted, that is, the laser lens or field lens is not parallel to the processing table.

Because the degree of the two is different, the distance between the laser beam and the workpiece after passing through the field lens will not be different. The final laser will fall on the processed object and the energy will appear divergent energy density. At this time, it will be The effects exhibited above the material are not uniform.

5. Reasons for the material, such as the thickness of the film on the surface of the material is not divergent or the physical and chemical properties change.

The material is more sensitive to laser energy response. It is usually the same material that the laser energy can reach the material destruction threshold is the same. When the thickness of the material coating is not the same, there are some other physicochemical treatment processes that are not average enough, and the effect after laser marking is also uneven.